For artist Jaxxy—Jax Davies (B.F.A. ’19)—the question of how meaning is constructed through representation is at the center of “Nuestra Madre del Perpetuo Socorro,” her work featured in the show, Angels x Aliens. The sculpture is a stained plexi-glass window and references the viral image of Maria Meza and her twin daughters, Central America, refugees fleeing from tear gas at the U.S. border.

After the show, Jax and I had a brief chat about her creative process and the decisions that went into this sculpture. For context, I first met Jax in AMST 2770 “Representing Racial Encounters/Encountering Racial Representations” in which we used references from pop culture alongside theoretical frameworks to analyze how people encounter each other. When I got home from the exhibit, I thought a lot about that course and somehow was able to find a half-intact and coffee-stained printout of Stuart Hall’s Representation. I realized that what I found so striking about “Nuestra Madre del Perpetuo Socorro” was the way in which Jax was able to transform this image through using her personal voice as an artist, a student of fine arts and cultural studies, and as an Afro-Chicana woman. Through this interview, I wanted to expand on the conversation that we started after the show and to open it up to the Cornell community.

What inspired you to use this image in your artwork?

Due to the constant flow of information we receive over social media and the internet daily, individual triumphs and experiences become drowned out in an instant. I knew I wanted to use this image, not only because of my emotional response to it as an Afro-Chicana woman, but because I wanted to give the image grounding, place, and permanency. The photo represents an individual experience, but it also speaks to larger injustices, as well as a common human vulnerability in family and motherhood. Instead of letting this image pass into the viral abyss, I wanted to devote a sculpture to this moment.

How did you decide on the stained plexi-glass window?

I wanted to represent Maria and her children, not as weak and defenseless, but as individuals with agency and pride. By using this mode, I was able to depict them in this way while also making a commentary on what we choose to adorn within stained glass. It was really important for me to back away from the traditional and use non-precious materials when making this piece (screen-printing, spray paint, plywood, garbage bags, etc.) In doing so, I wanted the result to transform into something new, something seemingly unassuming at first, but when adorned with so much love, care, and time, it towers tall and loud.

How does the significance of this image change in the context you created?

I hope that I have allowed this image to change in its transience. I want people to spend time with the piece, to recognize the image from when they first saw it, and experience those emotions again. I also want this image to immortalize a brutal history that is representative of the last 50+ years of our country’s history.

A trend that I think is concerning among social media users is the coincidence of a generally heightened sense of anxiety about what’s going on in the world and also a desensitization to those violent images that drive our anxieties. How do you think artists, as image-makers, can shift this?

I definitely agree with this statement, and I wouldn’t excuse myself from falling into it as well. Having exposure to so many powerful images allows truths to be ameliorated, but it can also create a culture of fake saviors and passive activism. Additionally, our speed and access to information can take a huge toll on how we view people’s stories, as well as our capacity for empathy. I think that artists have the power to captivate people’s attention and direct it where they want. By reproducing these images in an artistic context, we can spark new questions, memorialize histories, and conjure old ones back into the mainstream.

Check out Jax’s upcoming show, American Values: Clickbait Constructions of Border, in Tjaden Hall from May 6-10. See more of her work at www.jaxdavies.com. 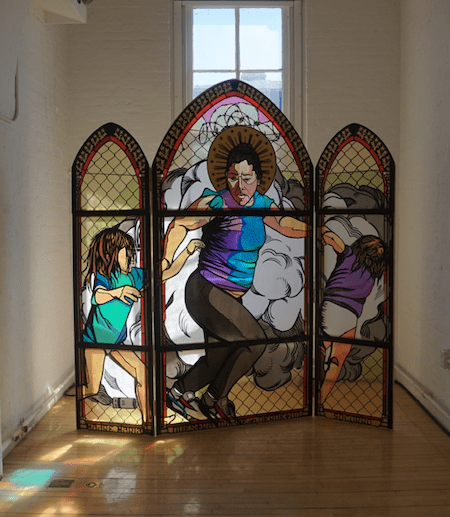 Norton chronicles road to revolution in ‘1774’