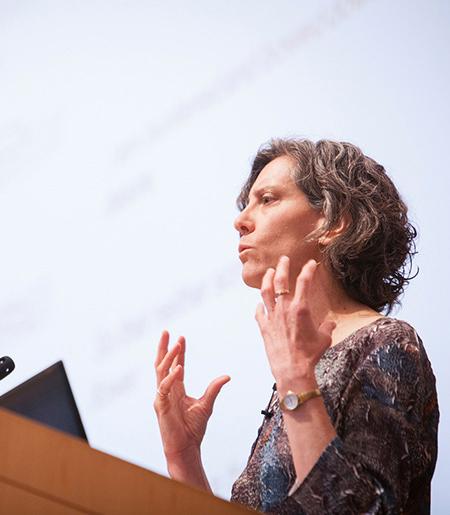 Judith Peraino's research in the areas of both medieval song and rock music concerns the intersection of subject formation, social identity, and musical expression. She is the author of two books: Listening to the Sirens: Musical Technologies of Queer Identity from Homer to Hedwig (2006), which investigates how music has been used throughout history to call into question norms of gender and sexuality; and Giving Voice to Love: Song and Self-Expression from the Troubadours to Guillaume de Machaut (2011), which investigates how the music of medieval Occitan and French “courtly love” songs encodes the self-conscious complexity of subjectivity expressed in the lyrics. Her publications on rock music and constructions of gender and sexuality include articles on Blondie, David Bowie, PJ Harvey, Mick Jagger, and early synthpop.

Peraino’s current book project, Popism in Stereo: A Musical Guide to the Warhol Seventies, explores Andy Warhol’s involvement with rock and pop musicians in the 1970s and early 1980s. In 2020, Peraino was awarded a National Endowment for the Humanities Fellowship to support this research. Her discovery of a tape of previously unknown songs by Lou Reed created for Warhol in 1975 was reported on by The New York Times, The Washington Post, and Rolling Stone, and is detailed in the article “I’ll Be Your Mixtape: Lou Reed, Andy Warhol, and the Queer Intimacies of Cassettes.”

Peraino’s publications have received the H. Colin Slim Award of the American Musicological Society, and the Philip Brett Award of the LGTB Study Group of the American Musicological Society. She has also received the Stephen and Margery Russell Distinguished Teaching Award from the College of Arts and Sciences, Cornell University.

Her undergraduate courses include: The History of Rock Music; Punk Culture: the Aesthetics and Politics of Refusal; The Beatles; Rock, Rap, and Ethics; and Music and Queer Identity.

Her graduate courses include: Synthesizing Pop: Electronics and the Musical Imagination (with Roger Moseley); The Velvet Underground Archive; Vocality and Embodiment; The Chansons of Guillaume de Machaut, The Songs of the Troubadours and Trouvères; and Gender, Sexuality and Glam Rock.

Peraino plays conga drums, and has performed with a number of Cornell ensembles and local Latin jazz and salsa groups.