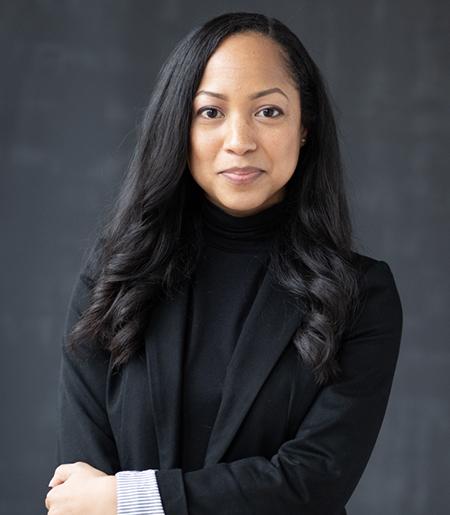 Tamika Nunley is Associate Professor of History with courses and research focused on the history of slavery, African American women's and gender history, the early Republic, and the American Civil War. Her first book, At the Threshold of Liberty: Women, Slavery, and Shifting Identities in Washington, D.C. (University of North Carolina Press, 2021) reveals how African American women—enslaved, fugitive, and free—imagined new identities and lives beyond the oppressive restrictions intended to prevent them from experiencing liberty, self-respect, and power. Consulting nineteenth-century newspapers, government documents, letters, abolitionist records, legislation, and memoirs, Nunley traces how black women navigated social and legal proscriptions to develop their own ideas about liberty as they escaped from slavery, initiated freedom suits, created entrepreneurial economies, pursued education, and participated in political work. In telling these stories, Nunley places black women at the vanguard of the history of Washington D.C., and illuminates how they contributed to the momentous transformations of nineteenth-century America. This book was named the 2021 Letitia Woods Brown Book prize winner for best book in African American women's history and the 2021 Pauli Murray Book prize winner for best book in Black intellectual history.

She is currently finishing a second book, The Demands of Justice: Enslaved Women, Capital Crime, and Clemency in Early Virginia, 1662-1865 with the University of North Carolina Press. This book examines clemency in legal cases that involve enslaved women accused of capital crime in early Virginia. In these legal encounters, we not only see a system that worked to define and affirm a commitment to legal paternalism that upheld the rule of law, but decades of responses made by the countless enslaved women accused of capital offenses. The Demands of Justice examines how these responses constituted the makings of an intellectual history of enslaved women’s articulations of justice. She has published articles and reviews in The Journal of Southern History, The William and Mary Quarterly, the Journal of American Legal History and the Journal of the Civil War Era.

In addition to being a lifetime member of the Association of Black Women Historians, she serves on the editorial board of Civil War History, The Journal of Southern History, and the Journal of the Civil War Era. She has served on committees for the Society for Historians of the Early American Republic, the Society of Civil War Historians, and the Southern Historical Association.
Her work has been supported by the Andrew Mellon and Woodrow Wilson foundations as well as the American Association of University Women and the Bright Institute Fellowship.

*Finalist for the ASALH Book Prize

“Thrice Condemned: Enslaved Women, Violence, and the Practice of Leniency in Antebellum Virginia Courts” Journal of Southern History 87, No. 1 (February 2021)

*Winner of the 2021 Letitia Woods Brown Prize for Best Article

"Slavery and the Political Touchstones of a Young Republic," The William and Mary Quarterly (79) 1

“Teaching in Climes of Unrest: BLM, Slavery, and the Intellectual Underpinnings of Student Protest at Oberlin” in The Panorama, a digital publication of the Journal of the Early Republic (Aug. 21, 2017)